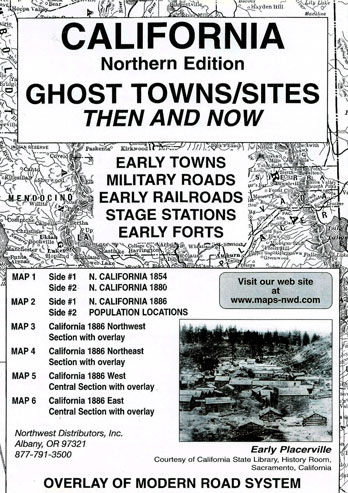 California (Northern) Ghost Towns/Sites:  Then and Now is a package of 6 maps.  This package includes:

The overlay, which is used over the four sections of the 1886 map of California, has been reproduced from a modern road map. The purpose is to show the changes in the state over a period of approximately 100 years. Place names may appear on the historical maps but may be absent on the current map. The reader should note that some of the early locations were moved from time to time while others changed their names or simply failed. Accompanying text with anecdotal stories from the history of each of the four sections of the state appears on the reverse sides of maps #3-6. The companion title California (Northern Edition) Gold & Gems: Then and Now is a package of five maps showing the locations of gold and gem deposits throughout the state. All rockhound enthusiasts, history buffs and amateur prospectors interested in the history of California will surely want to own both titles for the northern and southern portions of the state. Yreka was bypassed several miles to the east. Numerous roads were shown connecting the early town sites in the mother lode region east of Sacramento and Marysville. The reader should be reminded that some of the early place names might have been a post office operated in a ranch house or an early stage station as well as town sites. Some locations were moved from time to time while others changed their names or simply failed. The chosen sites of early place names and locations were selected at random with no effort to credit those chosen or discredit those that were not. The early maps were obtained from the National Archives and the overlays were created from a modern map. Population chart was taken from a 1900 George F. Cram Atlas of 1900, History of Western Cities and Towns by Riley Moffat and the California State Library census records. Other information came from California Place Names by Gudde, California Ghost Trails by Broman, Ghost Towns of the West by Lane Publishing and Ghost towns of the Pacific Frontier by Florin. Photographs are credited to each doner.